There is an open-air museum called “Open Air Museum of Old Japanese Farm Houses” in Toyonaka-City, Osaka Prefecture, in which typical houses (mainly farm houses), built in the Edo era (17th-19th century), are removed and reconstructed from all over Japan.

Japan extends north and south and has different climates depending on the location, and thus the buildings have styles peculiar to the place.

There are 12 buildings, collected from the north to the south of Japan, on the site of the museum having an area of about 36,000 square meters.

The site is not flat but has hills and a valley; so, you can have the feeling of going hiking and enjoy seasonal flowers.

I’ll introduce you to the buildings in the open-air museum in three parts.

1. First, the entrance of this museum is Nagayamon Gate, removed and reconstructed from Osaka. The owner of this gate was a village master in the Edo era. This gate is a combination of a gate and buildings standing on both sides of the gate, including a storage room and a warehouse. The gate was a symbol of an owner’s social standing at that time.

2. Passing through the gate, you can see a big white storehouse. It is “the Rice Granary” from Osaka. In the Edo era, many rice granaries lined the banks of Dojima River. Osaka was a center of commerce in Japan.

3. This building was come from Hida, Shirakawago village in Gifu prefecture, where all of them are covered with snow in the winter, and called Gassho Zukuri (a house with a steep rafter roof, the word Gassho meaning two hands pressed together in prayer). This structure is strong in snow and wind.

This three-story house consists of a main house and two attached huts, a bathroom on the right side and a kitchen on the left side. The first floor of the main house was a residence and the second and third floors were workplaces. 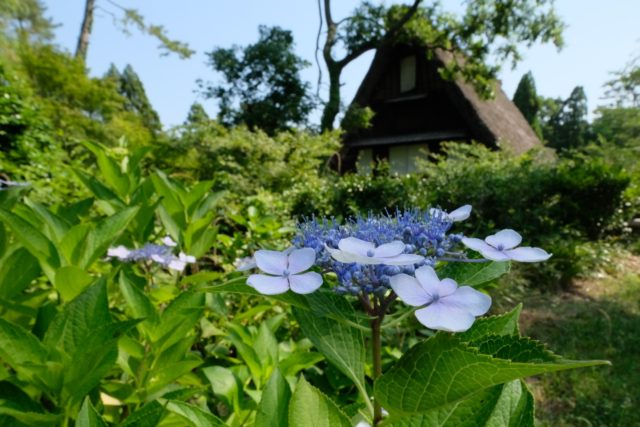 This is also not a building but Kuri-Fune, a boat used in Amami Oshima in the Edo era. It’s a small size boat being about 3 meters long and made by hollowing out a tree trunk. Two or three fishermen went fishing using the boat.

To be continued. Please look forward to the next time!